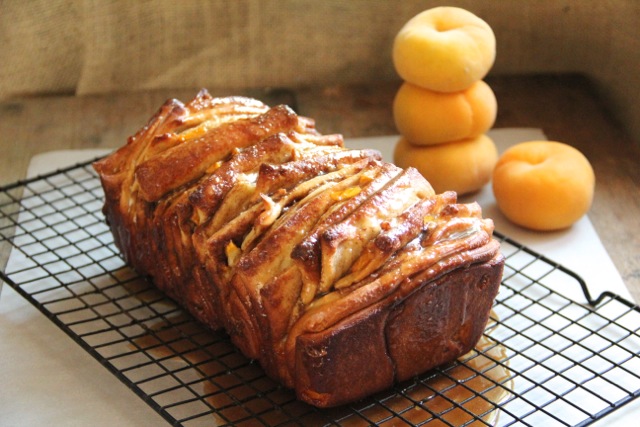 Last week, my 8-year-old son walked into the house carrying a large box, exclaiming, “Mom, I found this at the front door!” Seeing the surprise and glee that immediately swept over me, he smiled and tried to pass the heavy box to me in a cute, cumbersome, 3rd-grader type of way and asked, “What is it?”

“Fruit!” I replied, spying the unmistakable branding on the box that makes me feel right at home: Family Tree Farms. Suddenly, I am transported back to the Kings River in Central California – to jet skis and barbecues, to families and friends gathered, and fruit trees exploding with the absolute most delectable fruit imaginable. This box of fruit from my farmer friends nearly brought me to tears. Those happy, nostalgic, feeling-completely-loved-and-not-forgotten-after-moving-far-far-away-to-Alaska sorts of tears. Inside the box was two flats of a brand new, fragrant, sweet variety of yellow saturn peaches called “Peach Pie” – just for me to try and play around with in my kitchen.

And play I did! This is a summer version of my extremely popular Caramel Apple Pull-Apart Bread. The original recipe was the 3rd most popular recipe on Alaska from Scratch in 2012. I truly hope you love this peach version as much, if not more! For step-by-step photos on assembling this bread, click here. Big thanks to Family Tree Farms for the beautiful peaches! Stay tuned for another recipe featuring their peaches on Friday. Check out this awesome video highlighting the Peach Pie variety (plus a quick, fun recipe) from Family Tree Farms. In a microwave-safe dish, melt the butter until just melted, but not too hot. Stir in milk and vanilla. Set aside.

Add flour, sugar, and salt on top of water/yeast mixture in mixing bowl. Turn mixer on low, add eggs, then stream in milk/butter/vanilla mixture gradually until a soft dough forms. Add flour by the tablespoon until the dough pulls away from the sides of the bowl and forms a ball. Turn mixer up to medium speed and knead 3 minutes. Cover and let rise in a warm place 90 minutes.

Meanwhile, in a small bowl mix together the brown sugar, cinnamon, and salt for the filling. Set aside. Prepare the peaches and melt butter just before the dough is done rising. Grease a standard 9x5 loaf pan.

Using a pizza wheel, cut dough into equal-sized, long strips, about 3-4 inches wide. Sprinkle the first strip with 1/6th of the chopped peaches. Lay the next strip on top of the first strip. Sprinkle with peaches and cover with another strip. Repeat until all the strips are stacked on top of each other.

Turn loaf out onto a rack with parchment paper underneath it. Drizzle the loaf with the warm caramel glaze. Pull apart and enjoy warm, dipping the bread in the remaining glaze on the parchment paper.

Disclaimer: Family Tree Farms provided me with a box of peaches as a gift at no cost to me. I was not required to write a post or a review in exchange for the gift nor was I compensated in any way. All opinions expressed are my own.