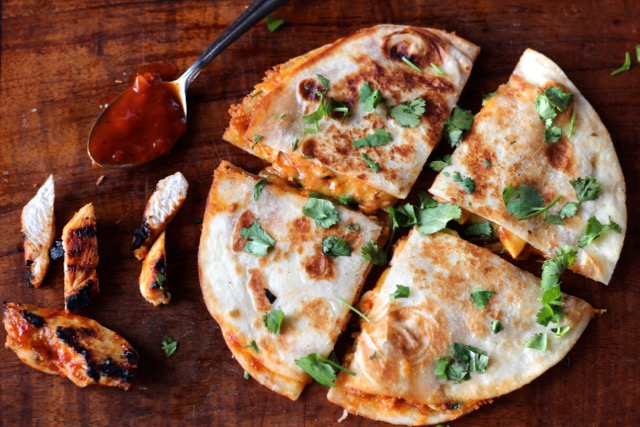 My eleven year old son is obsessed with football. Tossing the football outside in the snow, playing football video games inside, watching all the classic football movies in search of his favorite, wearing football gear, and creating football tackle dummies out of just about anything he can find. Meanwhile, I’m busy thinking of football food worthy enough to rival his football frenzy. I can’t believe it’s already playoff season and super bowl is just around the corner. When thinking about game day finger foods, I want something messy and cheesy, something that has little kick to it and a lot of flavor, something that requires I lick my fingers and grab for a napkin and a cold beverage at the same time. With all this in mind, I was inspired to take the flavors from my barbecue chicken pizza recipe and transform them into a crispy, melty barbecue chicken quesadilla. It’s a great way to use up leftover barbecue chicken that you might have on hand. I used a spicy sweet honey chipotle lime barbecue sauce to go along with these quesadillas because that added heat is perfect alongside the cilantro and cheese.

Heat a large skillet over medium heat. Swirl the pan with oil. Spread 1 tablespoon of barbecue sauce evenly onto one of the flour tortillas. Sprinkle with 1/2 cup cheese, 1/4 cup barbecue chicken, and 1 tablespoon each red onion and chopped cilantro. Top with another flour tortilla and place into the hot pan. Fry the quesadillas until brown and crisp on both sides and until the cheese is completely melted in the middle. Repeat with remaining tortillas, adding more oil to the pan as needed. Cut the hot quesadillas into triangles. Serve promptly with additional barbecue sauce for dipping, if desired.